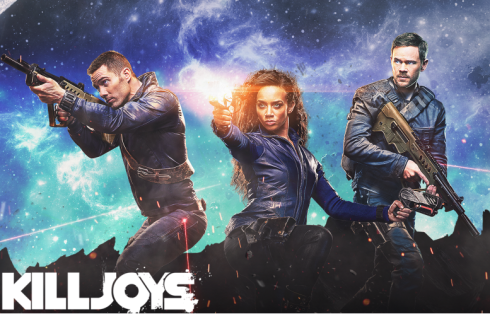 If there was a sleeper hit this last summer that I wish everyone had caught onto it was KILLJOYS. The series follow a three-man “killjoy” operation made up of Dutch, Johnny, and newly joined D’Avin (who is also Johnny’s brother). They are bounty hunters that work for “the rack” and have zero political affiliations. The show is a throwback to series like FIREFLY and nineties TV action-adventures but with a rocker-edge that I absolutely love (GUARDIANS OF THE GALAXY would also be a good example of a similar attitude set in space). All the episodes are up on Syfy’s website so you should definitely check it out but for now let’s break down an episode!

Killjoys is a Canadian space adventure drama series that aired its first season on SyFy this past summer and was recently picked up for a second season. The show was created by Michelle Lovretta who previously created cult series Lost Girl. “With exciting space-based action, deep world building, and a standout cast, Killjoys has struck a nerve with viewers and critics alike. We can’t wait to see what adventures Michelle Lovretta and Temple Street take Dutch, John and D’avin on in season two.” David Fortier and Ivan Schneeberg, the executive producers of the show, were quoted as saying “We couldn’t be more excited to bring back Killjoys and its stellar cast to audiences across the U.S. We look forward to working with the team at Syfy for a thrilling second season.”

DUTCH, head of the trio of killjoys the team centers on
JOHNNY, long time friend/co-worker of Dutch
D’AVIN, Johnny’s brother and newly joined team member
FANCY, another killjoy and adversary of the team
LUCY, the ship our trio flies and has a intercom voice
KHLYEN, Dutch’s childhood mentor who insists on harassing her
SARAH, a doctor and friend-with-benefits with D’Avin
TURIN, the rack rep that sends the killjoys out
LUCAS, a civilian involved in the crisis

A-STORY: Dutch goes in search of Joe away from her crew to find the device for Khlyen before the other killjoys arrive.

B-STORY: D’Avin and Johnny team up with rival Fancy to track down Dutch, Big Joe, and the mystery device.

C-STORY: Sarah works to find the location of a Dr. Jaeger for D’Avin.

SEASON ONE, EPISODE FIVE: “ONE BLOOD”

A: Heroine DUTCH meets up with her former mentor (now nemesis) Khlyen secretly where he tests the deal they made for her to help him out by poisoning a room full of people. Dutch yells for everyone to get out in order to save as many people as possible and getting the information that Khlyen wanted her to get.

A/B: The team is called in for a  “black warrant.” The team is thrilled but D’avin is confused. He’s going to meet “the family.” (A black warrant is when multiple killjoys are brought in to track down a bounty, competing against one another for a large sum of money)

B: The Killjoys all meet up at a bar and Fancy gives D’avin a hard time. D’avin and Dutch throw shade right back at Fancy.

C: Sarah and D’avin speak privately and he’s stand-offish. She offers to use her Company connections to help him and if she’s successful he has to return to her for therapy.

A/B: The killjoys are given their mission: bring in Big Joe, a rogue killjoy. The family is in an uproar to have to turn on one of their own.

A: Khlyen calls Dutch out of the meeting and gives her an implant so he can see/hear her always. He wants Dutch to work against her team to get the device off Joe’s stolen ship.

B: Johnny and D’avin meet a friend for help in tracking down Joe’s ship, but he is not forthcoming. They threaten him and receive information.

A: Dutch heads off on her own. Khlyen attempts to drill her skills but she storms off in anger and ends up shot in the shoulder.

B: Fancy breaks into the ship Lucy and makes them paranoid about Dutch ditching them during the black warrant contest. He wants to join them. Johnny and D’avin reluctantly agree.

A: Dutch wakes, she was slowed down by Big Joe’s shot at her. She goes after him.

C: Sarah sends the company man a drink, he’s responsive to her flirtation.

B: Johnny, D’avin and Fancy track Dutch to where she was shot. They’re worried.

A: Dutch finds Joe. They embrace and she warns him about the other killjoys coming after him.

A: Dutch and Joe fight over the device he stole. He refuses and tells her to walk away as she pleads with him.

A: Dutch and Joe are ambushed. Dutch has an opportunity to get away but when Joe’s life is threatened she folds.

A: Dutch and Joe are captured. While in captivity, Joe asks what he stole. He doesn’t know but tells her the rest of his sad story. Dutch is empathetic.

A: Their attackers want to know who Dutch is. She’s given him all the information she can so they prepare to torture her, ripping out the implant that Khlyen installed earlier.

C: Sarah hits on the company man more. When he’s not looking she puts something in his drink.

B: The boys finds where Dutch is being held. D’avin ignores Fancy’s warnings and heads in for Dutch.

A: Dutch’s captor explains the politics behind his motivations. Dutch is steadfast that  the rack (the organization killjoys work for) doesn’t play politics.

B: Fancy harasses Johnny as they wait for D’avin. Fancy shows off his tech, taking out multiple guys and impressing Johnny.

A: The captors are pissed as they get more information. They prepare to torture Joe.

A/B: They hear fighting outside the barn and panic. The captor uses the mystery device in hopes it will kill those outside and it kills his entire familial line.

A: Dutch tests the area to find out how the device works. It appears to target a single bloodline and has left one man, Lucas, who married into the family and is now all alone. Dutch wants to trade the bomb for mercy for Joe.

A: Turin doesn’t want to turn over Joe to the company. The Company representative, now recovered from Sarah’s drugging, threatens Turin and upgrades Joe warrant to a 5, kill warrant.

A: Joe panics and holds Dutch and her gun to his head. She refuses. Fancy kills Joe. Everyone watches in horror.

A: Khlyen wants Dutch to turn the device/bomb over to him. She says she’s done.

A: Khlyen attacks Dutch so he will give him what he wants. She fights back and Khlyen quickly apologizes, saying he won’t leave without her.

C: The company man arrests Sarah for what she’s done. She tries to talk her way out of it, but they call her bluff. He wants to know who Dr. Jaeger is (the name she was searching for). She won’t say and is arrested.

A: Johnny demands to know what Dutch has been up to. Dutch is in tears as she tells Johnny and D’avin that Khlyen is tracking her.

A: Johnny immediately begins making plans to leave, to get Dutch away from Khlyen as fast as possible. Dutch refuses. She is determined to kill Khlyen herself.

Killjoys is classic five-act structure with a tag and a minimum of two storylines. If you’ve read any of the other hour-long breakdowns on this site you may have been able to spot the structure on your own! Everything before the titles is set up. The inciting incident is the reveal that their target is Joe. The A-story decision is for Dutch to do what Khlyen wants. Act 2 sets Dutch on her way and gives us the decision for the B-Story: the boys teaming up with Fancy. The end of Act 3 is Dutch and Joe’s capture with Dutch’s emotional attachment to Joe shining through. This is also the midpoint.

One note on midpoints I have been thinking about a lot late… If you’re having trouble in a breakdown figuring out what the midpoint is take a look at the low point. Here, the low point is the bomb going off at the end of Act 4. The bomb goes off because the captors get their hands on it, making the introduction of the captors the midpoint. I bring this up because I was thinking about it while working on the breakdown for STAR WARS: THE FORCE AWAKENS. In the original trilogy, the low point of A NEW HOPE was the death of Obi Wan Kenobi. People have been pointing the similarities between the old and new movie, which led me to initially think that the major character death was the low point, but it’s not. It’s a third act twist. Since Rey’s goal is to get BB8 to the resistance the false climax is their arrival at Maz’s cantina and the low point is that Rey is caught which never would’ve happened if Rey hadn’t discovered the lightsaber and run away from her fate and into the forest.

Anyways, the point is that sometimes it’s easier to break things down when you look at them backwards.

Act 5 is the climax. Dutch’s decision was to trade the bomb for Joe’s mercy but that’s obviously not an option. Even though killjoys’ sole motivation is “the warrant is all” the warrant upgrade on Joe goes against Dutch’s emotional journey of the episode. She has been trying to leave her killing past behind in her new life as a killjoy and maybe if Joe hadn’t told her his past she would’ve been able to do it, but Dutch realizes that for her the warrant is not all and there are bigger things at stake. She can no longer sit idly by an allow the political problems continue to grow.

It’s very straightforward storytelling that perfectly balances the week-to-week issues with the overarching series villain and impending doom. It’s also a style that seemed to become less popular in the era of LOST and THE SOPRANOS but has come roaring back with the high number of action-adventure series. Definitely a style to keep an eye in our own projects.

One thought on “Killjoys”